Generating Cohesion in a Virtual World 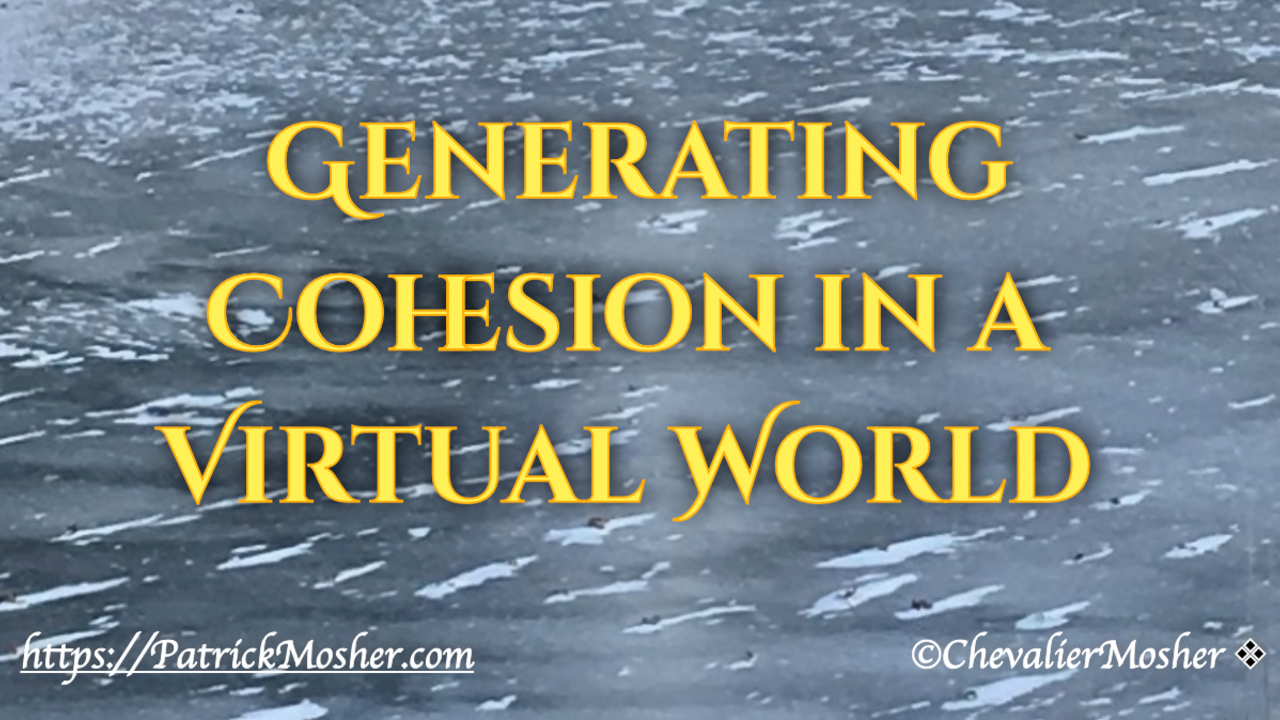 On our Holiday call with my oldest daughter, our conversation drifted to the challenges she faces in her consulting job.  She works with people all over the country and literally the world.  She is quite familiar with the consulting lifestyle I had for over 30 years.  Travel.  Imagine, you and your team traveling every week to deliver strategic solutions to clients.

Clients' confidence was bolstered by seeing the team on site.  Somewhere they knew that personal sacrifices were being made on their behalf.

That all changed with the Pandemic.

As much as my daughter loves staying at home, the pandemic creates a HUGE challenge for her and her team.

How do you generate cohesion when you lead a virtual team?

No team dinners.  No project kickoff.  No milestone celebration parties.  No walking down the hall to give an encouraging word to a team member whom you know is struggling.  No commiserating about awful flights and lousy rental cars.

When my daughter shared this challenge with me, I thought to myself, "I'm a world expert on organization structures, decision-making and teams.  How will I respond to this challenge?"

I found my first clue in the most common element on the planet:

I LOVE explaining common terms from a scientific perspective.  I call this A to B Mechanics.

So, let's talk about COHESION.

Cohesion brings us together.  Cohesion is glue.  It helps us stick together as we face challenges.  It helps teams achieve goals.

So what's inside this sticky, unifying thing we call, COHESION?

Webster dictionary gives us a scientific definition of Cohesion as the "molecular attraction by which particles of a body are united throughout the mass."

All good so far.  Here comes the science lesson.

As you may know, I have my Bachelor's degree in Chemical Engineering.  We called ourselves engi-nerds.  So, excuse my nerdiness, just for a second.

Wikipedia tells us the chemistry definition of Cohesion is the "action of like molecules sticking together."

Cohesion begins with "like molecules."   First, we need to see our sameness to stick together.  But that's at the molecular level.

The common physical example of cohesion provided across many texts is water.

We see water's cohesion as it flows.  Close your eyes and see the sun as it sparkles off a beautiful stream.

If only your team flowed with such beauty and grace!

To understand WHY water has such powerful cohesion, we need go to the atomic level of water.  Water molecules are made up of 2 Hydrogen atoms and 1 Oxygen atom.  H2O

How does this molecule keep it together?

By balancing Negative and Positive Charges all in one tiny molecule.

Each Hydrogen atom has a negative charge.  Oxygen has two positive charges.  Oxygen and two Hydrogens are attracted to each other by their OPPOSITE charges.

However, their opposite charges don't quite negate each other.  That's the beauty of it!  When the two Hydrogens and one Oxygen bond, there's a bit of a negative leftover charge on one end and a bit of a positive charge on the other end.  These 'leftover' charges attract other like-structured molecules.  They line up.  They hang together.

They create a strong cohesion.  These tiny water molecules bond so strongly together that you can walk on water in the Winter here in Minnesota!

I'm so GEEKING out right now!  I hope you are too!

You see, cohesion requires the right combination of positive and negative charges.  Diversity is REQUIRED for Cohesion.  That precise amount of diversity creates charge.  And that charge, or passion, aligns and attracts.

Water molecules remain at a distance, but their charge is so powerful, their bond so cohesive, they can withstand tremendous force!

The challenge of Team Cohesion in a virtual world is first addressed by assembling teams that are charged by diversity.  Diverse passions attract OTHERS charged in similar ways.

When facing the challenge of Team Cohesion in our virtual world, discover the passions that turn each team member ON.  Then, weave this tapestry of diverse passions into a unified team.

Your team will generate cohesion so powerful, well, as powerful as two feet of ice on a Minnesota lake!

The first clue to team cohesion is discovered in a simple drop of water!

Take a drink of nourishing water.  Encourage your team to do the same.  Give them water bottles.  Print your team name on the bottle.

Remind your team …. they are diverse, charged, unified …