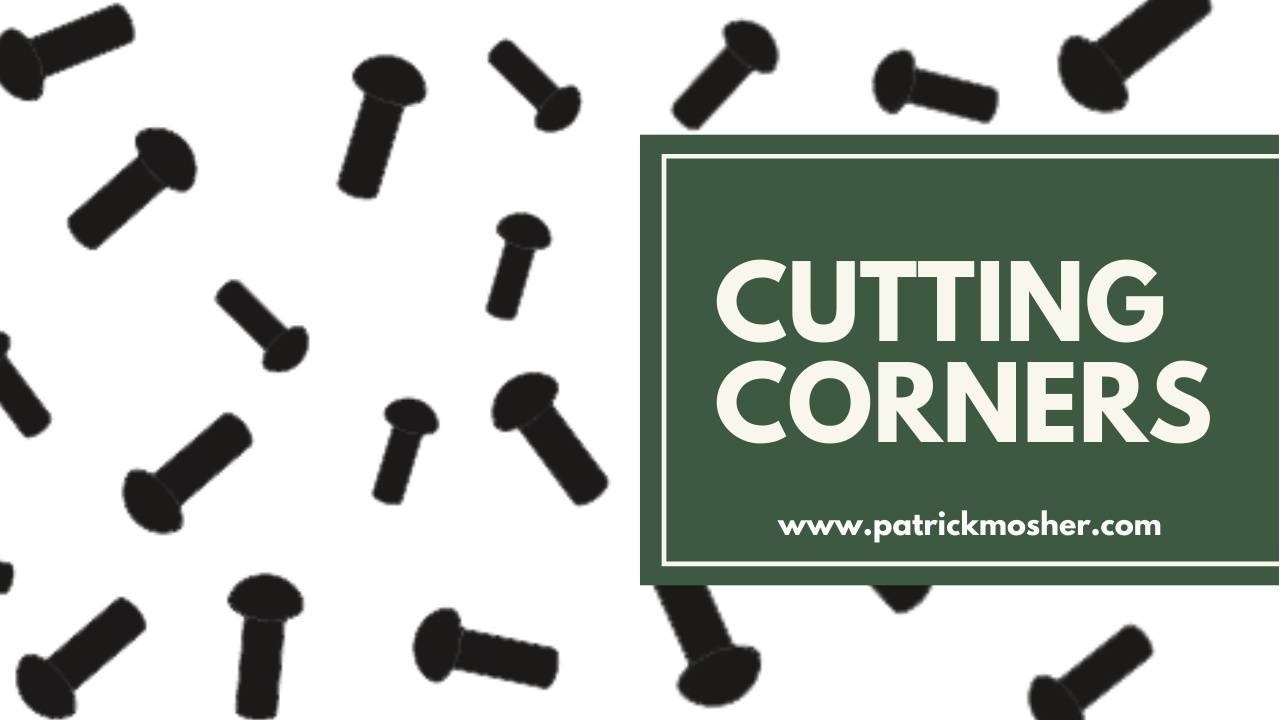 We all do it.  To make budget, we use cheaper materials.  We get by with sub-par software that barely meet our needs.  We jerry rig solutions.  And there's a craft to it.  Even an art.

It's awesome to figure out a dime solution for a dollar problem.

Today we're talking about Cutting Corners where we shouldn't.  It happens.  We pray the client doesn't notice.  We pray the solution holds together.  We hold our breath until that moment passes.

Sigh.  Our nightmare unfolds before our eyes.

Titanic's rivets were 3 ¾ inches long with a shank diameter of 1 inch.  3 million of them held the Titanic together!

In 1998, scientists from the National Institute of Standards and Technology made a revealing discovery about Titanic's iron rivets.

The Titanic was a huge ship for the times.  They pushed the limits of shipbuilding.

Where are you pushing the limits of your industry or technology?  These are the stress points to watch!

In building the Titanic, they used both steel and iron rivets.  Iron rivets were used because they were cheaper.  Also, the high bow and stern couldn't be reached with the crane that pounded steel rivets.  So, they used iron rivets which were easier to manually pound into place.  They saved the sturdier steel rivets for the hull.

Can you imagine the loud and continuous clinking sound of pounding 3 million rivets into place!

But here's the rub.

They now know that the gash made by the iceberg in Titanic's hull was merely 12 square feet.  Not nearly enough to flood the compartments.

The National Institute of Standards and Technology's analysis of Titanic's iron rivets revealed that they were composed of a significant % of slag, greatly weakening their strength.  (As a Chemical Engineer I geeked out at this study).

It is hypothesized that the icy cold waters made the iron rivets shrink a bit.  When Titanic hit the iceberg, the impact made many of the Iron Rivets pop.  And water gushed in.

Look, hindsight is 20/20.  We can blame the builders for using cheap iron rivets for the bow and stern.  Yet we know there were hundreds of similar decisions made every day when building the Titanic.

The same is true for your big strategic initiative.  You make cost-quality trade-offs all the time.

Build in contingencies for your biggest risks.  On my consulting projects, I always baked in at least a 15% budget contingency and a 20% time contingency.  I was upfront about these with my clients and new clients typically wanted to cut it, thinking I was padding our fees.

Trust is built in the long haul.  I not only build for success, I build sturdy, world class solutions that endure.

Even though I earned my engineering degree decades ago, I'm still an engineer in my bones.

We moved into our new house and for some reason the stairs of the deck led back to the garage instead of to the beautiful backyard and the pond.  We needed to re-position the stairs.

I got out my Pentel mechanical pencil and drew up the plans.  We live in Minnesota so I needed to put footers beneath the frost point.  I wanted the railing to support a person's full weight.  I drew up the plans and took them to Home Depot to have an expert inspect them.

Gary was great.  He pulled out his reading glasses and looked at my drawing.  He reviewed my wood choices, screw lengths and concrete for the footing.

When he completed his inspection, he dropped his reading glasses, looked at me and smiled broadly.

"If a tornado came through and blows your house down, these stairs would remain standing."

I built those stairs to my specs.  I'm an engineer after all.  I plan for contingencies.

One more story about cutting corners.

The Wisdom of Youth

When the other kid walked away, my grandson stood up and like an Olympic Gymnast stepped up on the sandbox wall and balanced himself precariously as he walked the beam from one side to the near corner and then to the other side to the opposite corner.  As he passed me, I said,

"Eli, it would've been faster if you just cut across the sandbox."

His response was wise advice for executive leaders.

Don't cut corners.  Make the journey 'Worth It.'