The Power of One Word 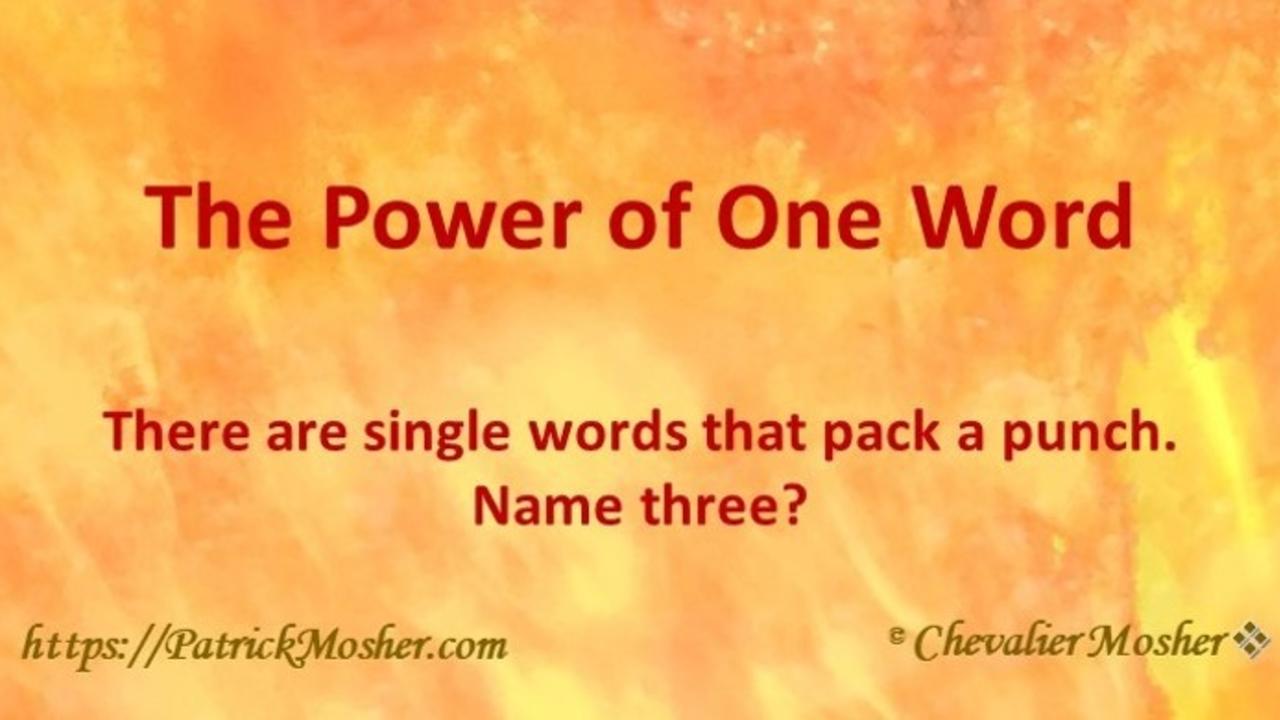 What was the first one word that stopped you in your tracks?

With a loud NO, you learned to freeze and stop what you were doing.  And it didn't take you long to invoke NO when you didn't want that spinach mush forced into your mouth!

You learned early that a single word has POWER.

There are other little words that are both subtle and powerful.  I call these JOINER WORDS.

Let's start with, THEN.

If you took a logic or computer programming class, you learned the power of IF-THEN statements.  They are statements of causality.  If the conditions of phrase A are fulfilled and true, THEN phrase B can also be true.

"If you clean your room, THEN you can go outside and play."

"If you meet all the performance objectives, THEN you can get promoted."

THEN is so powerful, you can drop it completely and merely imply its existence:

"If you jump off the cliff, [THEN] I'll reward you handsomely."

Let's continue our journey into Joiner Words with THEREFORE.

THEREFORE joins two phrases.  The first phrase lays down a foundation for the second.  It's like stacking bricks, one on top of the other.  THEREFORE is like the mortar between two phrases that makes them stick.

"What you're saying doesn't make sense; THEREFORE, I'm going without you."

The last Joiner Word in this diatribe is BUT.

BUT is the trickiest Joiner Word.  Phrase one is laid out there, gaining energy, trust, and agreement.  We get excited:

"Your performance was stellar this quarter…"

And then it happens.  That one little word follows.  BUT

It's like feeling the exhilaration of riding a cool wave and getting dashed into rocks.  The word BUT puts us on an emotional roller coaster!

When two phrases are joined with BUT, the second phrase qualifies the first.  I think of it like a Venn Diagram.  The first phrase describes something in totality with the BUT describing a piece of the whole that doesn't quite fit.

However, that's not how it feels.  Using BUT can totally annihilate the first phrase, leaving it lifeless.  Meaningless.  And we feel deflated.

"I apologize, BUT you need to realize…"

I've facilitated hundreds of design sessions and executive decision-making meetings over the course of my 30-year consulting career.  I consistently make people smile because I correct the use of BUT to YES AND.  I like to use YES AND because it affirms the previous phrase and ADDS another thought, rather than NEGATES, taking something away from the previous phrase.  It's a subtle change in language and it's powerful.  (You see how I could have used 'but' in the previous sentence?).

When you hear one of these Joiner Words, THEREFORE, THEN and BUT, your brain scrambles backwards to remember the first phrase so you can decipher the second.  It's hard work that happens in a millisecond.  Your brain must work both logically and emotionally!

These Joiner Words are powerful:  THEREFORE, THEN, BUT … and AND.